I’ve been traveling for almost four years now and it seems that on every journey I take,  I meet someone that’s brand new to this type of life.  I usually try to give that person as many tips as possible and try to make their first time an experience they won’t forget.  And every time I meet someone like this I think about my first time leaving home and why I really got into doing this.

As I’ve said before my family owned a campground when I was growing up so I was lucky enough to have a childhood that anyone would covet.  We had a lake, river, forest, dogs, cats, goats (yes I said goats) and the best part of all was…..I never had to wear shoes!  On top of that my family would also go hiking, and take “country cruises” to other cool places in the area.  So you can most likely say that I got my love for the outdoors at an early age.

But then my Mom and Dad got separated and we sold the campground when I was 13.  We moved into a tiny one-story house in a small town called Waterman, IL.  I don’t know if it was just being young or if I was just having trouble with living in town and having everything be so different with my life, but I turned into a jack-ass.  I was just so bored that I was doing things that were totally unlike me.  So needless to say, just a year and a half later we were on the move again.

This time we moved to a bigger town called DeKalb, IL.  I spent another year or so going down the wrong road when one day I realized how stupid I was being.  I changed everything.  I changed friends, I moved out on my own, and started to work very hard.  It was during this time (about 6 years ago) that I found Cool Works.com.  I applied at every job I found on there but I didn’t know anything about the seasonal world and it was off season.  (Plus like everyone else, I had other things going and I didn’t think I would actually do something like that.) 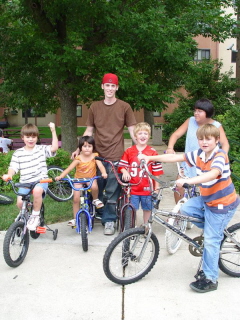 Me with a few of the kids

During my big change I was working as Head Maintenance Man at a big apartment complex.  I wanted to start “my new life” helping others so I bought 25 bikes from the bike auction that me and my mom were volunteering at, and I fixed them up.  Then I let every kid who didn’t own a bike at the complex come and pick out their bike of choice.  That day I got to see 3 kids ride a bike for their first time.  After I saw the looks on those kid’s (and mother’s) faces I realized that I love to help.

Then the day came around when I lost my Head Maintenance position.  I was devastated!  That night, I was looking for other jobs online when I happened to look at Cool Works again.  I wasn’t getting any replies back from anyone, but I had the “travel bug” and there was no getting away from it.  I took a long look at the USA map and I remembered that we had a family friend in Tennessee.  That night I packed everything I thought I would need and shoved it into the cab of my 1982 GMC S-15.  I had made up my mind.

The next morning my family was extremely shocked when I called them, and they did not like my idea.  But they also knew that if I say I want to do something, the chances are that I’m gonna do it.  So we made a compromise.  Instead of leaving the next day I would wait a week, and me, my Dad, and my sister would all go to the Roger Water’s concert.  The days coming up to that concert I was so freaked out because I was starting to have doubts and I really wanted one of my friends to come with me.  The only problem was that none of them wanted to leave! 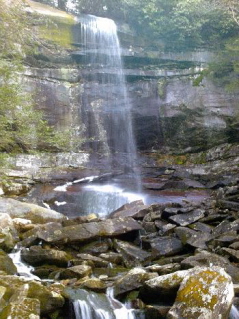 That night at the concert I was blown away.  Not only by how good the music sounded but because one line really hit me…..”kicking around on a piece of ground, in your hometown, waiting for someone or something to show you the way”    (Pink Floyd, “Time”)  I heard that and decided instantly “that’s not me, I’m not waiting for anything!” I was really gonna do this!  The next morning my family had a nice breakfast and we all had a sentimental send off.

Leaving that house was one of the hardest parts of all my travels.  But as soon as I set out on that 11 hour road trip, I started to have the best time of my life….. I was doing it!  I was getting the chance to see places I had only seen in a book or on TV!  Not only that but I was going to be living in The Smokey Mountains!  I was so stoked!

I had someone down there that helped me along the way and I had tons of fun.  I also got a calls back from tons of jobs once the season started back up too.  I had almost forgot I put in all those applications at Cool Works!  I ended up moving to California, learning about the seasonal world from other seasoned workers, and never looked back.

I’m still chasing my dream and I hope to still be doing this for years to come.  If you ever thought about doing this then try!  Most seasonal jobs only last a few months so even if it’s not for your thing, you still get the chance to spend some time living somewhere that most people only dream about.